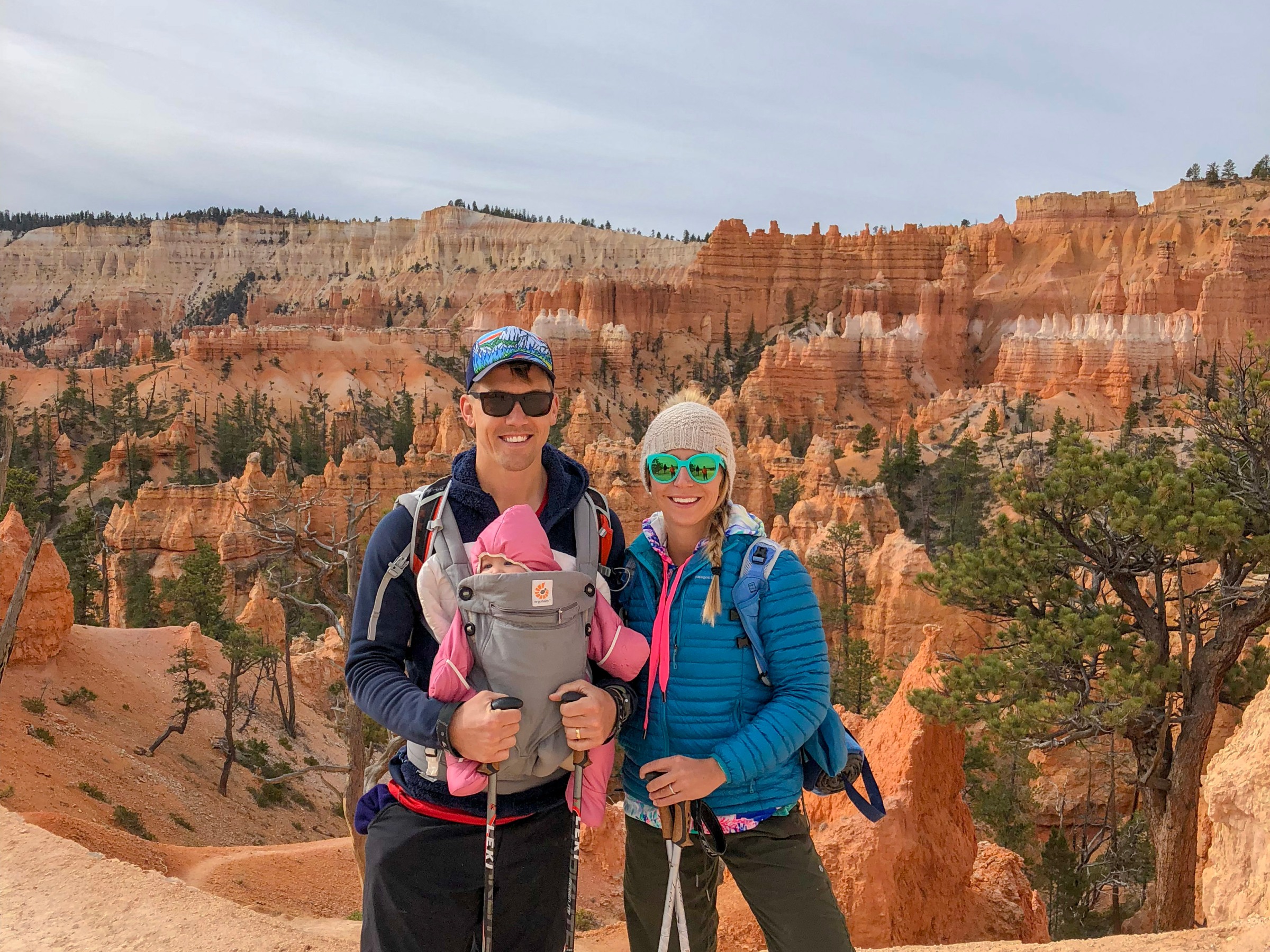 Bryce Canyon National Park has always been a bit elusive to us.  It’s not really on the way to anywhere, which kept if off our radar for far too long.  After a strong recommendation from a friend, we decided to make a dedicated trip to see the mystical wonders of the hoodoos.

The drive to the park coming from the south was rather quiet and uneventful.  We rolled into Bryce Canyon late on a fall evening.  We planned to get a walk-up site in the North Campground to make the most of our short visit versus staying in National Forest or BLM lands outside of the park.  Bryce does not take reservations for campgrounds, but thankfully in the fall getting a walk-up site was a cinch since the summer surge of visitors was over.

As a heads up, the park includes camper vans in their RV rate.  At the time we visited it was $30. Check their website for updates if you are planning a trip.  We found their campgrounds to be well worth the investment.  The camp was incredibly clean and well-managed.  The host cleans every fire pit after each group leaves.  We’ve never seen such clean fire pits or restrooms. Kudos to the host!

Like everyone, we came to Bryce to see the famous pillars of rocks called hoodoos.  Bryce has the largest concentration of hoodoos anywhere in the world.

Bryce offers opportunities to see the hoodoos for all visitors.  If time or access are limited, touring the park from the rim of the canyon is a great way to take in many of the most popular views without descending into the canyon.  If you are visiting for a few hours and wish to hike, there are several short, scenic trails that start from the rim of the canyon and descend into the hoodoos.  Walking among the hoodoos is a unique experience, so if you have the time, we highly recommend it!  We opted to do two different loops during our stay.

On our first day we hiked the Fairyland Loop Trail, an 8 mile loop to see the China Wall, Tower Bridge, and tons of hoodoos.  We opted to do this hike based on a recommendation from a friend that it was her favorite trail in the park, and it is also promised to be less crowded than some of the other more popular trails. The trail climbs and descends about 2300 feet, just enough to get your heart pumping!

Since we camped in the North Campground, we just walked from our site to start the hike.  We opted to do the hike in a counterclockwise direction, as we heard it offered a more gradual climb to exit at the end.

The beginning of the hike steadily descended about 1.5 miles through Campbell Canyon.  At the bottom of this portion, there’s lot of hoodoos to see.  These hoodoos are formed by ice cracking the rock apart as it freezes and thaws.

We then began a steep climb up to the saddle where we enjoyed lunch and took in Fairyland Canyon.  Bryce has some of the best air quality in America, so visibility is incredible.

From there, we hiked down into the canyon and then took switchbacks up to Fairyland Point.  This point has gorgeous views over to Aquarius Plateau.

To finish up the hike, we followed the Rim Trail south toward Sunrise Point.  This portion of the trail has very different scenery – mostly pine trees instead of pink and orange hoodoos.  Just before turning back into the campground, we had one more peak into the canyon.

Our number one pointer with this hike is to dress in layers.  We hiked in the fall, and despite the cooler temperatures when we started, we layered and de-layered about five times as we hiked.

If you have little kiddos along with you, there’s a fun “Hike the Hoodoos” scavenger hunt that encourages little ones to search for three benchmarks in the park and turn in rubbings or pictures with the benchmarks to receive a prize.  Next time we come with Mar, we will get her in on it!

For the sunset, we drove down to Bryce Point Overlook and cooked our dinner since the campground itself didn’t offer epic views.  It was a wonderful place to sit and watch the hoodoos change colors as the sun went down.

On our second day in the park, we made breakfast at Sunrise Point and hiked the Navajo Loop and Queen’s Garden trails.  Although these trails were busier than the Fairyland Loop, the crowd wasn’t terribly heavy  due to the cooler weather in the fall season.

We opted to hike the Wall Street section of the Navajo loop.  Of note, Wall Street is one of the most dangerous places in the park for rock falls, so take caution when hiking!

On the Queen’s Garden trail, we were able to locate Queen Victoria at the end of a short spur trail.

All in all, Bryce offered some of the most unique and stunning landscape of almost anywhere we have visited.

Outside of the park

There are some options to camp outside of Bryce in the Dixie National Forest off of UT-12 between HWY 89 and UT-63.  We were on a tight timeline, so we opted to camp in the park.  If you are looking for tips to find free campsites in national forest or BLM lands, check out our blog on Tips For Finding Free Campsites.

The park is between 8,000 and 9,000 feet.  This means the weather might be quite different than where you are coming from.  During our fall visit, this meant nighttime temperatures in the 20s.  Brrrr! This elevation and the cooler temperatures can mean snow and ice much earlier in the season than in lower elevations.  Plus, the trails get a lot of shade in the fall and winter months, leading to a higher chance of ice on the trail despite mid-day temperatures.  The elevation is also something to take into account when hiking.  The air is a bit thinner, so you might notice you are huffing and puffing a bit more than usual!